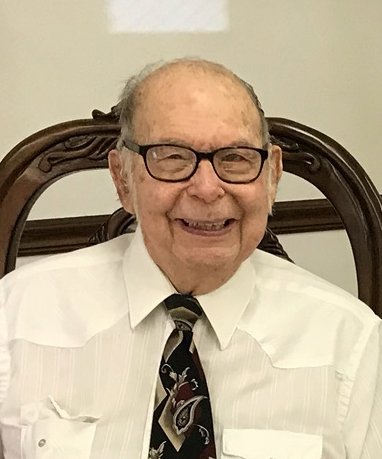 Von Wesley (Wes) Llewelyn, of Leonardville, Kansas, passed away on September 10, 2018 at the age of 90. He was born May 27, 1928, at the farm home near Bala, Kansas, west of Riley, the youngest of six children, to Vaughn and Anna (Bletscher) Llewelyn. He attended Bala Grade School, then Leonardville Rural High School, graduating in 1946.

Wes was a life-long farmer on his farm west of Riley, retiring in 1990, but continuing to be involved with the operation well past that time. He was a progressive farmer and a good steward of the land, winning the Kansas Bankers Conservation Award in 1983.

He was active in the churches he attended, at Bala Presbyterian church as a child and young man, then Countryside United Methodist Church, and more recently, Sedalia Community Church.  He recounted receiving Jesus as the Savior of his life at a revival at the Bala Presbyterian Church as a teen, and tried to live out the implications of that during his life. He was a man who strongly valued integrity and honesty in his interactions with others and taught this to his children through his words and by his example.

In the community, he served on the USD 378 school board from 1975-1979. He was also on the board of the Leonardville Nursing Home, representing both the Countryside and Sedalia churches at different times.

On June 1, 1954, he married Lydia Mugler, in Oak Hill, Kansas. They were married over 30 years before she preceded him in death in 1985. They were blessed with three children, Richard (Linda) Llewelyn, of Manhattan; Marianna (Mark) Crawford, of Moundridge; and Ronda Llewelyn-Bush (J.W. Forsythe) of Clay Center; as well as two grandsons, Andy Llewelyn of Dodge City, and Matt Llewelyn, of Manhattan.  On May 18, 1990, Wes married Dorothy (Haller) Llewelyn, who survives, at home in Leonardville, as well as her four children, Greg (Terrie) Haller of Manhattan, Larry Haller (deceased) , Deanna (Rick) Borg of Manhattan, and Mark Haller of Leonardville, and several step-grandchildren and great-grandchildren and one great-great-grandson.

He was preceded in death by his first wife, Lydia Llewelyn; one son-in-law, Jerry Leopold; one step son, Larry Haller and five siblings.

He lived at home in Leonardville with Dorothy until a recent illness. Dorothy cared for him well and loved him greatly.  He celebrated his 90th birthday with friends and family in May, which was something he had greatly looked forward to and it gave him great satisfaction to have lived longer than any of his five siblings by reaching 90 years of age.

Funeral services will be at 10:30 am on Friday, September 14, 2018 at the Anderes-Pfeifley Funeral Home with Pastor Kevin Larson officiating.  The family will receive friends from 6:00 until 8:00 p.m. Thursday at the funeral home.  Burial will be in the Bala Cemetery, west of Riley.

Memorial contributions may be made to Sedalia Community Church and may be left in care of the Anderes-Pfeifley Funeral Home.

To order memorial trees or send flowers to the family in memory of Wes Llewelyn, please visit our flower store.
Send a Sympathy Card