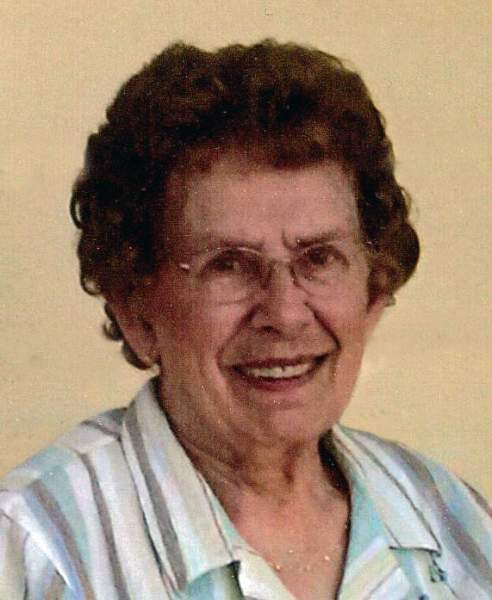 She was born on February 1, 1922 on the family farm west of Randolph, the daughter of Bruce and Lillian (Vogelsang) DeWyke.  She attended the Heller country school and graduated from Randolph Rural High School in 1939.

On April 26, 1943 in Manhattan, she was married to Gail L. Hohman.  He preceded her in death in 1989. In her early years, Ruth worked at Beckman’s Store, Peterson’s Cafe and Markley Hatchery in Old Randolph.  She also cooked at Blue Valley High School for a few years, but mainly, she was a homemaker.  She was a member of the Randolph United Methodist Church where she sang in the choir, the United Methodist Women and Randolph Senior Center.  Ruth enjoyed working outdoors in her garden, crocheting, quilting and making afghans for her family members.

In addition to her husband, she was preceded in death by her son, Jack Hohman; her son-in-law, Hal Springer and two brothers, Earl (Helen) DeWyke and Cecil (Ruth) DeWyke.

Funeral Services will be held at 10:30 a.m. Saturday, January 5, 2019 at the Randolph United Methodist Church with Pastor Sandy Ferguson officiating.  The family will receive friends from 7:00 until 8:00 p.m. Friday at the Anderes-Pfeifley Funeral Home.  Burial will be in the Randolph Fancy Creek Cemetery.

Memorials may be made to the Ruth Hohman Memorial Fund for the family to distribute at a later date to some of Ruth’s dearest causes.  Contributions may be left in care of the Anderes-Pfeifley Funeral Home.

To order memorial trees or send flowers to the family in memory of Ruth E. Hohman, please visit our flower store.