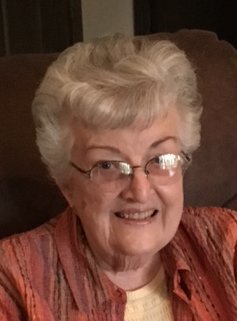 Rosie Helen Ferris Lolley, age 83 of Abilene and formerly of Riley, passed away on Monday, June 18, 2018 at the Stormont Vail Hospital.

She was born on April 2, 1935 on the family farm near Ransom, the daughter of William and Katie (Strauch) Bauer.

Rosie worked in the Career Planning and Placement Center at Kansas State University for nearly 35 years.  She was a member of the Riley United Methodist Church and was a Bible school teacher, PTA secretary and Boy Scouts Treasurer.  She enjoyed playing cards, crossword puzzles, knitting crocheting and making prayer shawls.  She loved having her family close and helping them in anyway she could.

She is survived by her three children, Melvin “Monty” Ferris, Jr. and Marilyn of Wamego, Steve Ferris and Diane of Abilene and Louise Ferris and Sharon of Rochester, Washington; two sisters, Lola Donecker of Great Bend and Evelyn Lawless of Topeka; six grandchildren and thirteen great grandchildren.

In addition to her husbands, she was preceded in death by her parents and five siblings, Walter Bauer, John Bauer, Mabel Bauer, Benjamin Bauer and Lillian Bauer.

A memorial service will be held at 11:00 a.m. Monday, July 2, 2018 at the Riley United Methodist Church with Rev. Bill Eisele officiating.  The family will receive friends from 3:00 until 4:00 p.m. Sunday, July 1, 2018 at the Anderes-Pfeifley Funeral Home.  Inurnment will be in the Riley Cemetery.

Memorials may be made to the Riley United Methodist Church and left in care of the Anderes-Pfeifley Funeral Home.

To order memorial trees or send flowers to the family in memory of Rosie Ferris Lolley, please visit our flower store.