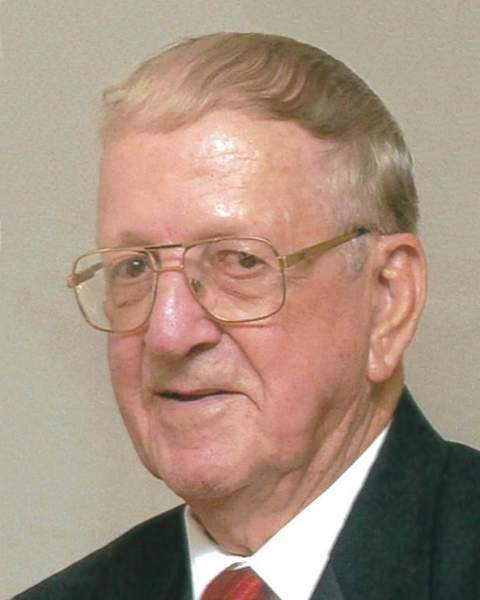 Raymond L. Lindquist, age 95, of Waterville, passed away on Thursday, September 1, 2022, at Ascension Via Christi Hospital in Manhattan.

Ray was born August 28, 1927, on a farm near Waterville.  His parents were Albin H. and Estella P. (Bergeson) Lindquist.  He graduated from Waterville High School with the class of 1945.  A few months after graduation and few weeks before his eighteenth birthday, he joined the US Navy serving in the Pacific Theater of WWII. On June 12, 1949 Ray married Dorothy J. Clark at the Christian Church in Barnes.

After the war Ray attended Kansas State University for a year.  He then taught at the Harbaugh Country School. Ray went on to graduate from Kansas State University in 1960.  After teaching he went to work with his cousin Ken in a construction company they owned together.  In 1972 Ray and Dorothy purchased the Waterville Lumber Company which he operated until his retirement in 1992 when his son Randy took over.

Ray loved his town and was always ready and willing to do his part.  In addition to all the other things he did for Waterville, he was proud that he helped build the Lipton Ball Fields.  He enjoyed wood working, playing golf, going to K-State Football games and having “coffee” with his friends at the Corner Store.  He loved to travel; Ray and Dorothy had visited all fifty states and Europe.

Survivors include his wife Dorothy, his son Randy (Theresa) Lindquist of Hanover, two grandsons, Chris and Matt and a great grandson, Jonathan.

Preceding Ray in death were his parents and a sister Virginia Hubbard.

A visitation will be held between 6:00 and 8:00 pm, on Wednesday, at Christie-Anderes Funeral Home in Waterville.

A Memorial Service is planned for 10:30 am, Thursday, September 8, 2022, at St. Mark Lutheran Church in Waterville, with Pastor Berniece Ludlum.  Inurnment with Military Honors will be at Riverside Cemetery in Waterville.

Memorials are suggested to the Riverside Cemetery Association and may be sent in care of Christie-Anderes Funeral Home at PO Box 61, Waterville, Kansas 66548.

To order memorial trees or send flowers to the family in memory of Raymond L. Lindquist, please visit our flower store.