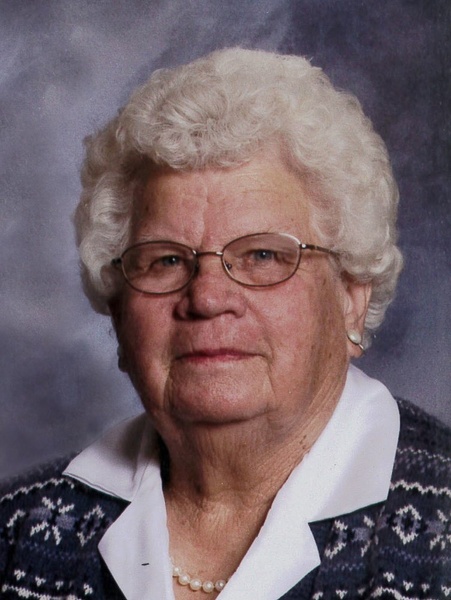 Mildred Joan “Milly” Nelson, age 88 of Riley, passed away Friday, October 30, 2020 at Ascension Via Christi Hospital in Manhattan. She was born on December 26, 1931 in Leonardville, the daughter of Walter R. and Ella V. (Larson) Peterson. She graduated from Leonardville Rural High School where she graduated at the top of her class. Following high school, she worked as a clerk for Charlson Wilson Abstract before becoming a full time farm wife. On June 9, 1951, she married Raymond Lee Nelson. He preceded her in death on March 27, 2020, after nearly 69 years of marriage. Milly was an ideal farm wife. She took pride in doing anything on the farm, from daily chores, to driving tractors and checking pastures. There wasn’t a wire gate she couldn’t open or a square bale she couldn’t throw. Her devotion to the farm was rivaled only by her love for baking. Her apple pie was second to none and her caramel brownies were known all over the county. Faith was very important to her and she was a member of the Walsburg Lutheran Church, serving in many ways including being a member of the L.C.W. She enjoyed the camaraderie of her ladies Circle group and never missed an activity. Milly also enjoyed gardening and would routinely take fresh flowers to the Leonardville Nursing Home for the residents to enjoy. Sports were a big part of her life and she loved following her grandchildren and great grandchildren in their sporting events and activities. She is survived by one son, Alan Nelson and wife Kimberly of Riley; three grandchildren, Mike Nelson and wife Becky of Leonardville, Jordy Nelson and wife Emily of Leonardville and Kelsey Nelson of Leonardville and seven great grandchildren, Izabel, Teske, Koy, Rhett, Royal, Brooks and Adda. In addition to her husband, she was preceded in death by her parents; two sons, Jerry Ray Nelson in 1952 and Thomas Lee Nelson in 1954; two brothers, Warren Peterson and Lyle Peterson and one sister, Eileen Stone. Funeral services will be held at 1:00 on Thursday, November 5, at the Walsburg Lutheran Church with Rev. Keith Wiens officiating. Respect calls may be made from 9:00 a.m. until 6:00 p.m. Wednesday at the Anderes-Pfeifley Funeral Home. Burial will be in the Walsburg Cemetery. A memorial has been established for the Walsburg Lutheran Church. Contributions may be left in care of the Anderes-Pfeifley Funeral Home.
To order memorial trees or send flowers to the family in memory of Mildred Nelson, please visit our flower store.
Send a Sympathy Card