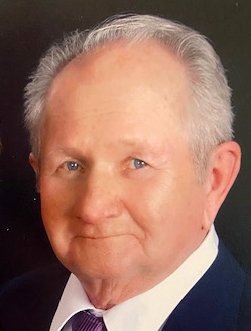 Mervin John Emil Forslund, age 86 of Gladstone, Missouri, passed away Monday, May 31, 2021 at his residence.   He was born on March 8, 1935 northwest of Leonardville, the son of Eddie William and Elva Viola (Lindstrom) Forslund.   On March 14, 1964 he married Faye Ruth Anderson. She survives of the home. Mervin worked for TWA in the Overhaul Base Terminal, where he retired after 35 years.  He served in the Army, volunteered for Meals on Wheels for 20 years, and was a member of the North Cross United Methodist Church in Kansas City.  He loved spending time with his grandkids, watching K-State sports, working in his garden and being outdoors.  In addition to his wife, he is survived by two daughters, Kim Rogowski and husband Dave of Kansas City, Missouri and Kelly Dudeck and husband Chad of New Port Richey, Florida; one son, Kirk Forslund and wife Kim of Naples, Maine; eight grandchildren: Eric Rogowski and wife Haley, Amanda (Rogowski) Gates and husband Cody, Ryan Rogowski, Sarah Rogowski, Nathan Dudeck, Alisha Dudeck, Rileigh Forslund and Karson Forslund; and sister Marilyn Heath of Riverside, Missouri.   He was preceded in death by his parents and one brother, Harlan Forslund.   Funeral services will be held at 2:30 p.m. Friday, June 4, 2021 at the Randolph United Methodist Church with Pastor Kevin Larson officiating. The family will receive friends from 1:30 p.m. until service time on Friday at the church. Burial will be in the Randolph Fancy Creek Cemetery. In lieu of flowers, memorials may be made to the Kansas State University Marching Band (Building Fund). Contributions may be left in care of the Anderes-Pfeifley Funeral Home.
To order memorial trees or send flowers to the family in memory of Mervin Forslund, please visit our flower store.
Send a Sympathy Card