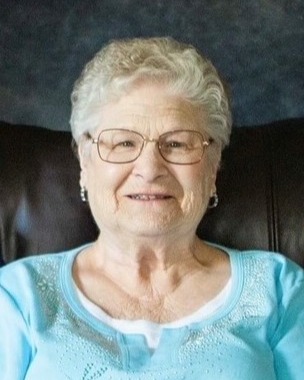 Mary Ellen Larson of Riley, KS was called home by her Lord and Savior, Jesus Christ on October 12, 2022.  She was 77 years old.  Surrounded by her children and covered in prayer and worship, Mary took her last breath on Earth and her next breath in the indescribable beauty of Heaven as a faithful servant of God.

Mary was born in Bloomington, Indiana on October 24, 1944 to Oscar & Nettie Collins. She was one of six children and went on to have Donna, Ricky, Vickie, and Wade with then husbands, Dave and Bob.  In 1994, Mary married Ralph E. Larson with whom she lovingly adored until his death in 2017.  Besides being a farmer’s wife and raising her children, Mary worked numerous jobs to include being a school bus driver,  Activity Director and Aide at the Leonardville Nursing Home, a Clerk at the Riley County Police Department, and a civil servant at Fort Riley, KS.  She retired federal service in 2003 as the DPCA Branch Chief.

After retirement, Mary earned her cosmetology license and opened “Mary’s Kountry Kuts” on the couple’s farm in Riley.  Her friends will remember her as a very protective mama bear whose many passions included quilting, reading, baking, and politics.  She was an ever-present ally, always willing to help, whatever the need.  Many remember her tireless work in organizing a community wide fundraiser to pay the medical expenses for a local man who had been stricken with cancer.  The event was very successful and has since inspired others to include the Nelson Family Community Foundation (NFCF) two-day, annual event to raise financial assistance for local community members.

Devoted to her faith, Mary remained a lifelong member of The Church of the Firstborn in Nashville, Indiana. She also became a Lay Member for Riley United Methodist Church and later, an active member of the Walsburg Lutheran Church in Leonardville.  Her love for Christ, and his teachings, gave Mary the will and strength to pray for peace and wellness for others during her final weeks on earth. Always the caretaker, Mary continued to give comfort and assurance to the loved ones surrounding her bedside in her final hours.

Funeral Services will be held at 2:00 p.m. Monday, October 17, 2022 at the Anderes-Pfeifley Funeral Home. The family will receive friends 1:00 p.m. until service time.  Mary will be laid to rest in the Riley Cemetery next to her husband and dear friend, Bob and loving son, Rick.

In lieu of flowers, memorials may be made in Mary’s honor to Meadowlark Hospice or the Nelson Family Community Foundation (NFCF).  Contributions may be left in care of the Anderes-Pfeifley Funeral Home.

To order memorial trees or send flowers to the family in memory of Mary Larson, please visit our flower store.