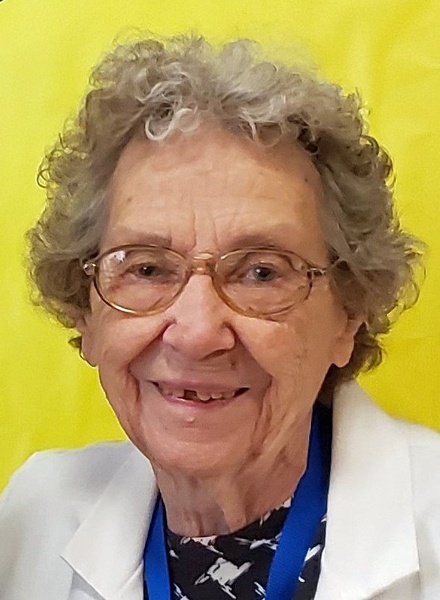 She was born on December 13, 1924 in Hutchinson, the daughter of Ora A. and Flossie C. (Holdeman) Manny.

Margery worked at Vega Airplane Plant in Burbank, California from 1942-1945, the Randolph Post Office from 1947-1958, owned and operated Burgman’s Lockers in Leonardville with her husband from 1958-1976 and worked at Bletscher’s Radio and Electric in Leonardville from 1976 until her retirement in 1996.  She was a member of the American Legion Memorial Unit, Leonardville City Library Board and the Leonardville Senior Citizens.

She is survived by three daughters, Kathern Stocker and Jim of Merriam Woods, Missouri, Wanda Alderson and John of Clay Center and Linda Wanamaker of Manhattan; one brother-in-law, Leo Burgman of Leonardville; three sisters-in-law, Judy Springer of Hanover, Sharon Harding of Leonardville and Sandra Rightmeier of Randolph; nine grandchildren and many great grandchildren.

In addition to her husband, she was preceded in death by her parents; one brother, Melvin Manny; three sisters, Velva Bradford, Betty Short and Dorothy Harrah and several brothers and sisters-in-law.

Funeral services will be held at 10:30 a.m. Monday, September 23, 2019 at the Anderes-Pfeifley Funeral Home with Pastor Kevin Larson officiating.  The family will receive friends from 3:00 until 5:00 p.m. Sunday.  Burial will be in the Randolph Fancy Creek Cemetery.

A memorial has been established for the Margery Burgman Memorial Fund and contributions may be left in care of the Anderes-Pfeifley Funeral Home.

To order memorial trees or send flowers to the family in memory of Margery Burgman, please visit our flower store.