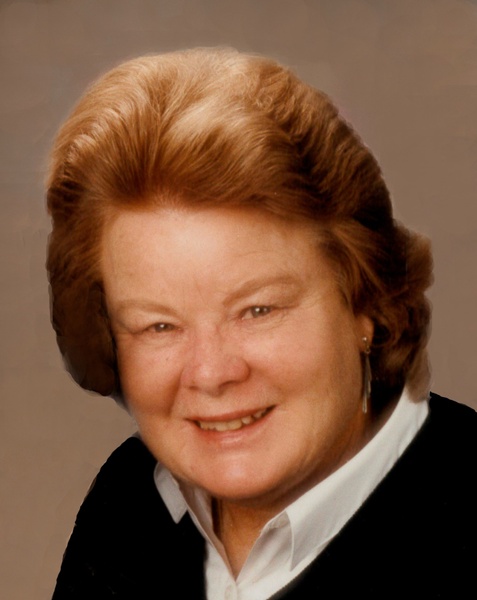 She was born on April 26, 1931, the daughter of Maynard Eugene and Marvel Ruth (Lee) Zeller on her father’s birthday. She was born at their first home, situated below the Sedalia Church, the second of seven children.

During her young years, Lu rode a horse to a one room schoolhouse, The Sedalia School, along with her older sister Barbara and her younger brother Vernon. She also attended Silver Creek School and graduated from Keats Rural High School in 1949. During her high school years, Lu learned to read music and play the trumpet. Later in life she encouraged her son Walt to play trumpet and enjoyed listening to him perform in many bands and symphonies. Lu also had great athletic ability which she later applied to golf. On her 80th birthday while playing golf in San Francisco, she had a hole-in-one.

Lu always wished she had attended college. Not having that opportunity, she educated herself throughout her life, and was especially interested in American History. She was a voracious reader and especially loved reading about pioneers and the settling of the American West. She was a lover of the arts and never passed up the opportunity to visit a museum or introduce one to young people. She loved listening to patriotic music, especially John Phillip Sousa.

Lu married Wayne Hollowell in 1950. They moved to Kansas City and entered the corporate world. They had two children, Walter and Gail. Wayne began his career in business with General Motors and then became an executive with Avon Products. Lu was a wonderful homemaker and supportive corporate wife, always ready to meet the challenge of the next opportunity presented to them as a couple.

In 1967, Avon offered Wayne a promotion to work at their Headquarters in New York City. The family transferred and began a new life in New Canaan, Connecticut, a commuting town to NYC. It was the life of Country clubs and glamourous parties in New York including New Years Eve at the Waldorf Astoria, and dinners at the likes of The Polo Club and The 21 Club. After their East coast years, they moved back to Kansas City and then lived in Albuquerque for many years where they enjoyed seeing Walter’s family grow… and grow.

Lu was an accomplished quilter and she loved to cook, bake and sew. In her final months, Lu was working on a quilt project that included embroidering blocks with the state flowers of all fifty states. She had completed 27 states when the ability to sew was taken from her before entering the hospital.

Lu loved Kansas and especially this community of Sedalia to which she had multi-generational ties. She spent many hours gardening at the church, helping with Vacation Bible School, and other church activities. She also loved The Silver Creek Beneficiary Club for women, to which her mother belonged before her.

She was preceded in death by her husband Wayne Hollowell in 2017 and two sisters, Virginia Zeller and Corrine Snow.

Funeral services will be held at 11:00 am Monday, July 18, 2022 at the Sedalia Community Church with Pastor Kevin Larson officiating. The family will receive friends from 3:00 until 5:00 pm Sunday at the Anderes-Pfeifley Funeral Home. Burial will be in the Sedalia Cemetery.

A memorial has been established for the Sedalia Community Church and Silver Creek Beneficiary Club. Contributions may be left in care of the Anderes-Pfeifley Funeral Home.

To order memorial trees or send flowers to the family in memory of Lu Hollowell, please visit our flower store.