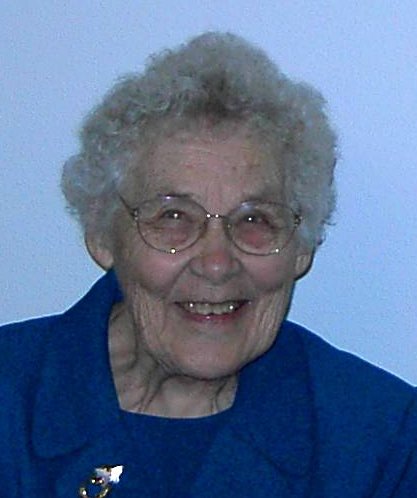 She was the born on August 11, 1917, the second child of Ludwig and Ida Erickson Lund.  Lorene grew up with her four brothers and one sister on the farm her grandfather had homesteaded near Lasita in northern Riley County.  She attended Pleasant Hill Grade School and graduated from Green High School in 1935.  She attended Emporia State Teachers College and taught in several one-room schools in Riley County before her marriage to George Visser May 12, 1945.  With a team of horses and a John Deere Model A tractor, they established their farm three miles east of Riley.

She was baptized and confirmed in the Alert Swedish Covenant Church.  She joined the Magic Methodist Church when she married her husband and was an active member of the Magic Church and the Riley Methodist Church after the 2 churches merged in 1952.  In 1977 she and George were selected as Kansas Master Farmer and Master Farm Homemaker, a well-deserved honor.  She served on the Boards of the Leonardville Nursing Home and the Riley County American Cancer Society.  She was active in numerous church, agricultural and community organizations and she was the community leader for the Happy-Go-Lucky 4-H Club when her children were in 4-H.

The family will receive friends from 7:00 until 8:30 p.m. Friday at the Anderes-Pfeifley Funeral Home.

Funeral services will be held at 10:30 a.m. Saturday, October 19, 2019 at the Riley United Methodist Church with Pastors Kevin Larson and Phil Smith officiating.  Burial will be in the Riley Cemetery.  Immediately following the burial will be a luncheon for family and friends.

In lieu of flowers, memorials have been established for the Riley County 4-H Foundation and Johnson Cancer Research Center.  Contributions may be left in care of the Anderes-Pfeifley Funeral Home.

To order memorial trees or send flowers to the family in memory of Lorene Visser, please visit our flower store.
Send a Sympathy Card