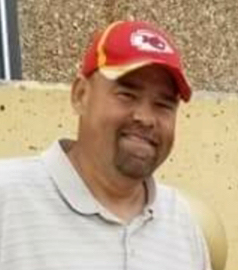 John Rodney Sutton, age 44 of Topeka, passed away after an extended illness at the UKH St. Francis Medical Center in Topeka.

He was born on February 23, 1978 in Kansas City, Missouri, the son of Francis and JoAnne Marie (Holten) Sutton.

On August 1, 2000 in Manhattan, he married Marcie Anne Hagenmaier.  She survives of the home.

John worked at the Wichita Greyhound Park until its closing, in various capacities, starting at the bottom and working his way up to better positions.  He then started working as a customer service representative and technician for One Call Concepts.  In 2009, he had kidney failure, receiving a transplant in 2013.  He later moved to Topeka.  John loved spending time with his family and taking his kids to practices and games.  He was excellent at cooking and drawing.  When he wasn’t able to get around as well, he enjoyed watching YouTube and TikTok videos.

In addition to his wife, he is survived by one his children, Riley John Sutton and Madeline Ann-Louise Sutton, both of Topeka; his father, Francis Sutton of Kansas City, Kansas; his siblings, Eligia Morales, Amber Lopez-Guzman and Francis Sutton, Jr., all of Kansas City, Kansas; his father-in-law, Frank Hagenmaier of Randolph; his step-dad, Chet Stone of Kingston, Missouri; his dog, Jack Jack and many aunts, uncles, nieces, nephews and friends.

He was preceded in death by his mother, JoAnne Stone and his mother-in-law, Marita Hagenmaier.

Mass of Christian Burial will be held at 2:00 p.m. Tuesday, March 8, 2022 at the Seven Dolors Catholic Church with Father Frank Coady as Celebrant.  Burial will be in the Randolph Fancy Creek Cemetery.

Memorials may be made to the John Sutton Memorial Fund to go towards his children’s education fund. Contributions may be left in care of the Anderes-Pfeifley Funeral Home.

To order memorial trees or send flowers to the family in memory of John Sutton, please visit our flower store.
Send a Sympathy Card