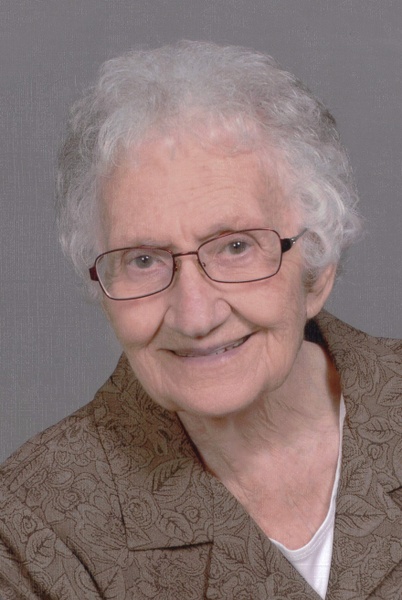 Jeanette J. Van Kirk Oentrich, age 92, of Barnes, passed away at the Washington County Hospital in Washington on Thursday, May 5, 2022.

Jeanette was born October 25, 1929, on her family’s farm near Greenleaf.  She is the daughter of Ralph W. and F. Geveane (Wanamaker) Clark.  She graduated from Barnes Rural High School in 1947.  She went on to receive her teaching certificate and taught at a country school near Home City for a short period.  She married Jay K. Van Kirk, Sr. at her parent’s home in Vliets, on May 2, 1948, he passed away on January 8, 1988. She married Marvin L. Oentrich at the Barnes United Methodist Church on November 2, 2003, he passed away on September 22, 2004.

As she raised her children, she worked endlessly on the family farm, then the family’s business, M&S Wholesale Electronics in Barnes, and later as a CNA at the Linn Nursing Home. Jeanette was a member of the Barnes United Methodist Church, the United Methodist Women, Friendship Circle, American Legion Auxiliary, and the Economic Home Unit, all located in Barnes.

To her family, she was the ultimate nurturer, an eternal optimist and the kindest soul. Through all of life’s trials she lived by the motto “one day at time” and with that courage, truly lived each and every day of her 92 years. Jeanette was an avid gardener and canner, treasured skills she passed onto her children and grandchildren. Her devout patriotism and passion for community and family are cherished memories her family will hold dear.

Viewing is from noon to 8:00 pm, Tuesday, with visitation between 6:00 and 8:00 pm, at Christie-Anderes Funeral Home in Waterville.

Funeral services are at 10:00 am, Wednesday, May 11, 2022, at the United Methodist Church in Barnes, with Pastor David Manyara and Pastor Sandy Ferguson officiating.  Music will be provided by Betty Guin, congregational hymns will include: “In The Garden” and “Amazing Grace” sung by the congregation.  Casket Bearers include: Brad Oentrich, Amos Cubit, Reiss Bruning, Matt Rion, John Diederich and Tim Heward.  Burial will be at Maplewood Cemetery west of Barnes.  John Doerr Post 145 American Legion Auxiliary will perform Funeral Rites at the cemetery.

Memorials are suggested to the Barnes United Methodist Church and may be sent in care of Christie-Anderes Funeral Home at PO Box 61, Waterville, Kansas 66548.

To order memorial trees or send flowers to the family in memory of Jeanette J. Van Kirk Oentrich, please visit our flower store.

Viewing will begin at noon, Tuesday.