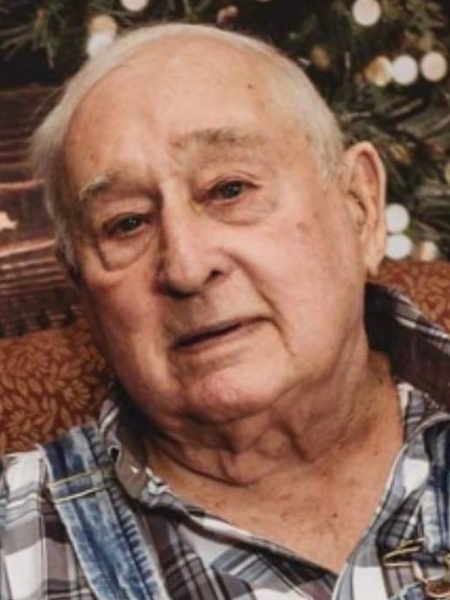 Howard was born March 20, 1930, to (John) Paul Miller and Ruth (Wheat) Miller also of Blue Rapids, Kansas. He grew up on a farm north-west of Blue Rapids where he later raised his family.  Howard graduated from Blue Rapids High School in 1949.  He later joined the United States Airforce on December 18, 1950.  Howard and Helen were joined in marriage on February 24, 1952.  They moved to New Mexico where Howard was stationed, and where they welcomed the first of 6 children into the world.  From New Mexico they were transferred to Alaska, for the remainder of Howard’s military service.

After leaving the service Howard and Helen lived in Salina, briefly where they welcomed their second child.  From Salina the couple returned to Blue Rapids, and then to a farm one mile from the family farm.  After his parents retired in 1970, Howard moved his wife and children to the Family Farm where he remained until he joined Helen at Blue Valley Nursing Home in 2017.

Howard was an active member of First Baptist Church of Blue Rapids for many years, where he served as deacon, trustee, Sunday School teacher, song leader and choir member.  Howard also was known to have given the message on a few occasions.

He was preceded in death by his parents, two grandchildren, two great grandchildren and a daughter in law Kathy Miller.

Viewing is from noon to 8:00 pm, Thursday, with visitation between 6:00 and 8:00 pm, at Christie-Anderes Funeral Home in Waterville.

Funeral services are at 2:00 pm, Friday, March 4, 2022, at First Baptist Church in Blue Rapids with Pastor Jeremy Henderson and Pastor Titus Mohler officiating.  Congregational Hymns include “In The Garden” and “The Old Rugged Cross” accompanied by Bre Henderson.  Casket Bearers are Howard’s grandchildren.  Burial is at Prospect Hill Cemetery, north of Blue Rapids.  Military honors will be presented by the George Bedford Post 169 of the American Legion in Blue Rapids.

Memorials are suggested to First Baptist Church and may be sent in care of Christie-Anderes Funeral Home at PO Box 61, Waterville, Kansas 66548.

To order memorial trees or send flowers to the family in memory of Howard P. Miller, please visit our flower store.