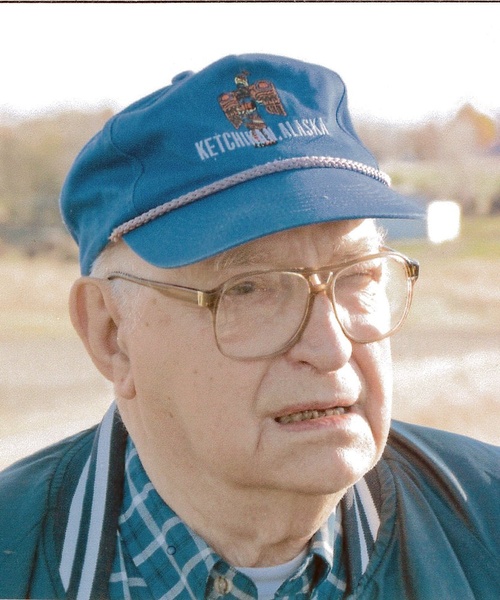 Harold Warren “Sprug” Burgman, age 95 of Leonardville, passed away Tuesday, February 28, 2017 at the Stoneybrook Retirement Community in Manhattan. He was born on July 2, 1921 in Randolph, the son of Oscar and Anna (Daniels) Burgman. He graduated from Randolph High School in 1939 and was a cook in the U.S. Army from 1942-1946. On August 15, 1946 in Hutchinson, he was married to Margery Jean Manny. She survives of the home. Harold was a meat cutter, starting at Chelstroms Storage in Randolph and then owning Burgman’s Lockers in Leonardville. He retired in that same profession from Kansas State University in 1989. He was a member of the American Legion and Leonardville Seniors. He served on the Leonardville City Council, Leonardville City Library Board and played, coached and umpired softball and baseball. He participated in horseshoe tournaments and enjoyed hunting, fishing, gardening and family vacations. In addition to his wife, he is survived by three daughters, Kathern Stocker and Jim of Merriam Woods, Missouri, Wanda Alderson and John of Clay Center and Linda Wanamaker of Manhattan; two brothers, Leo Burgman of Leonardville and Val Dean “Ferd” Burgman of Riley; three sisters, Judy Springer of Hanover, Sharon Harding of Leonardville and Sandra Rightmeier of Randolph; nine grandchildren and eight great grandchildren. He was preceded in death by one brother, John Burgman and three sisters, Delores Gillespie, JoAnn Fluharty and Shirley Duensing. Funeral services will be held at 10:30 a.m. Friday, March 3, 2017 at the Anderes-Pfeifley Funeral Home in Riley with Pastor Kevin Larson officiating. Respect calls may be made anytime Thursday. The family will receive friends from 6:30 until 7:30 p.m. Thursday. Burial will be in the Randolph Fancy Creek Cemetery. A memorial has been established for the Harold Burgman Memorial Fund. Contributions may be left in care of the Anderes-Pfeifley Funeral Home.
To order memorial trees or send flowers to the family in memory of Harold Warren Burgman, please visit our flower store.