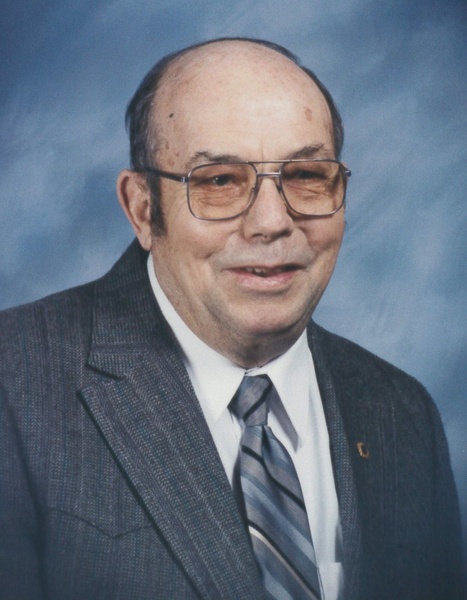 Harlen James Hageman, age 88 of Leonardville, passed away Wednesday, September 28, 2016 at Via Christi Hospital in Manhattan. He was born on October 28, 1927 on a farm northeast of Fairview Church, the son of Henry John and Hattie Lydia (Arents) Hageman. On August 20, 1950, he was married to Fern Elaine Bammes at the Leonardville EUB Church. She preceded him in death on August 3, 2014. Harlen was a farmer until Fort Riley expanded and then he hauled fuel to local farms for Farmer’s Union COOP until his retirement in 1992. He was a member of the Fairview Presbyterian Church and charter member of the Leonardville Lions Club. He was the sexton of the Fairview Cemetery since 1957 and rang the church bell every Sunday. He enjoyed his grandchildren’s sports activities, gardening and drinking coffee with his friends at many different locations. He is survived by one daughter, Cheryl Jones and husband Terry of Topeka; two sons, Gary Hageman and wife Carla of Leonardville and Galen Hageman and wife Sue of Riley; one brother, Eldon Hageman and wife Mary Jo of Keats; one sister-in-law, Elvie Hageman of Leonardville; eight grandchildren and five great grandchildren. In addition to his wife, he was preceded in death by one brother, Lavern Hageman. Funeral services will be held at 10:30 A.M. Friday, October 7, 2016 at the Fairview Presbyterian Church with Rev. D. Erich Schwartz officiating. The family will receive friends from 7:00 until 8:00 P.M. Thursday at the Anderes-Pfeifley Funeral Home in Riley. Burial will be in the Fairview Cemetery. A memorial has been established for the Fairview Presbyterian Church. Contributions may be left in care of the Anderes-Pfeifley Funeral Home.
To order memorial trees or send flowers to the family in memory of Harlen James Hageman, please visit our flower store.
Send a Sympathy Card