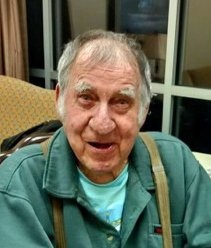 Galen Lee Parry, age 83 of Green, passed away Thursday, January 19, 2017 at the Clay County Medical Center. He was born on August 13, 1933 in Riley, the son of Arthur Lee and Edna (Larson) Parry. He graduated from Riley County High School in 1951. He married Anna Jean Girard on October 10, 1955. They later divorced. He then married Barbara Hager Baxter on August 11, 1983. She preceded him in death in 2009. Galen was the appliance salesperson and assistant manager for Gamble’s in Clay Center. Later he worked for Wilhelm Electric, COOP Hardware, Gregory’s Thriftway and Kiers Grocery Store. After his family, Galen’s first love was gardening. He used his garden to provide for his family and later in life, could be seen weekly at the local farmer’s market. He was a member of the Green United Methodist Church and enjoyed woodworking, square dancing and gambling. He is survived by five children, Dennis Parry and Linda of Moundridge, Ken Parry of Peabody, Sheila Kendall and Mike of Longford, Greg Parry and Chris of Clay Center and Joey Parry and Sandy of Meridian, Mississippi; his twin sister, Gayla Kidd of White City; twelve grandchildren and six great grandchildren. In addition to his wife, he was preceded in death by his parents and one sister. Memorial services will be held at 10:30 A.M. Monday, January 23, 2017 at the Green United Methodist Church with Pastor Sarah Gill officiating. The family will receive friends from 5 until 6:00 P.M. Sunday at the Anderes-Pfeifley Funeral Home in Riley. Burial will be in the Greenwood Cemetery in Clay Center. A memorial has been established for the Green United Methodist Church. Contributions may be left in care of the Anderes-Pfeifley Funeral Home in Riley.
To order memorial trees or send flowers to the family in memory of Galen Parry, please visit our flower store.