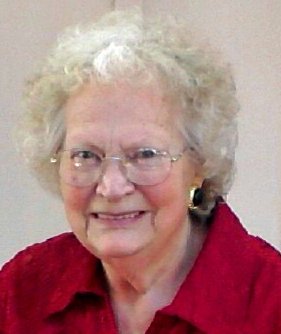 Ethel Hope McGinty, 86, of Manhattan, passed away from lymphoma on September 3rd, 2019 at the Good Shepherd Hospice House.

She was the youngest of eight children born to Lloyd and Ruth Moody in Lawrence, KS on April 16, 1933.

She grew up in and around Franklin County until worlds collided and she met Jerry McGinty (Ralph) her junior year at Princeton High School. Married after graduation in 1951, they moved around as farmhands, and when Jerry shipped out for the Korean War, she sewed jeans at the Lee Jeans factory in Ottawa, KS.

Like most women, her life was set aside while she took care of everyone else.  Moving homes often, she babysat, waited tables, squeezed pennies, had kids, and seized the chance to go to college to become a teacher.  Back when penmanship existed, she taught a generation of farmkids the poems of Sandburg and Rossetti as they copied them out in cursive.

If a life can be measured in Christmas cards, her stack had waitresses working through college, renters who moved in next door, and anyone else whose life story, birthday, and anniversary she inexplicably knew. Her family would scratch their heads and ask, “Who is this?” And, "We know someone named Freida?"

She brought home soldiers feeling homesick, fed nieces and nephews, mothered her kids’ friends, and if you crossed her path for long enough, you got an afghan.  Babies got tiny ones, and grown ups got ones the size of a bed.  As the miles of yarn crossed her lap, she turned it into something that became the hug you hadn’t realized you needed.

Like all of us, she wasn’t always sane. She simultaneously loved and loathed her family, and when they pushed her too far, the front door would slam, the tires spit gravel, and she’d go visit her sister Joy for a couple of days.  But she always came back. Sixty years later, she could still argue about which road those spinster sisters had lived on or the curtain rod she bought that only fit one window in one place they had ever lived. She didn’t always stand up for herself, but she made certain her daughters and granddaughters could by making sure they knew that, no matter what, they were loved.

As a way to live, there are worse things than looking out for others, bringing home strays, stuffing people with food, and escaping your life for a couple of days when you need to.  Just remember to come back.  And everybody gets an afghan.

She is survived by Jerry, her husband of 68 years, daughters Laurie Sutton (Eric), and Mary, granddaughters Rachelle Crosby (Brian) and Sarina Robb (Haley), great grandchildren Caleb and Savannah Crosby, and her sister, Alice Cox.  Dozens of nieces, nephews, cousins, and friends have felt her touch.

In lieu of a service, contributions in her memory may be made to: The Good Shepherd Hospice House, 3801 Vanesta Drive, Manhattan, KS  66503.

To order memorial trees or send flowers to the family in memory of Ethel McGinty, please visit our flower store.
Send a Sympathy Card