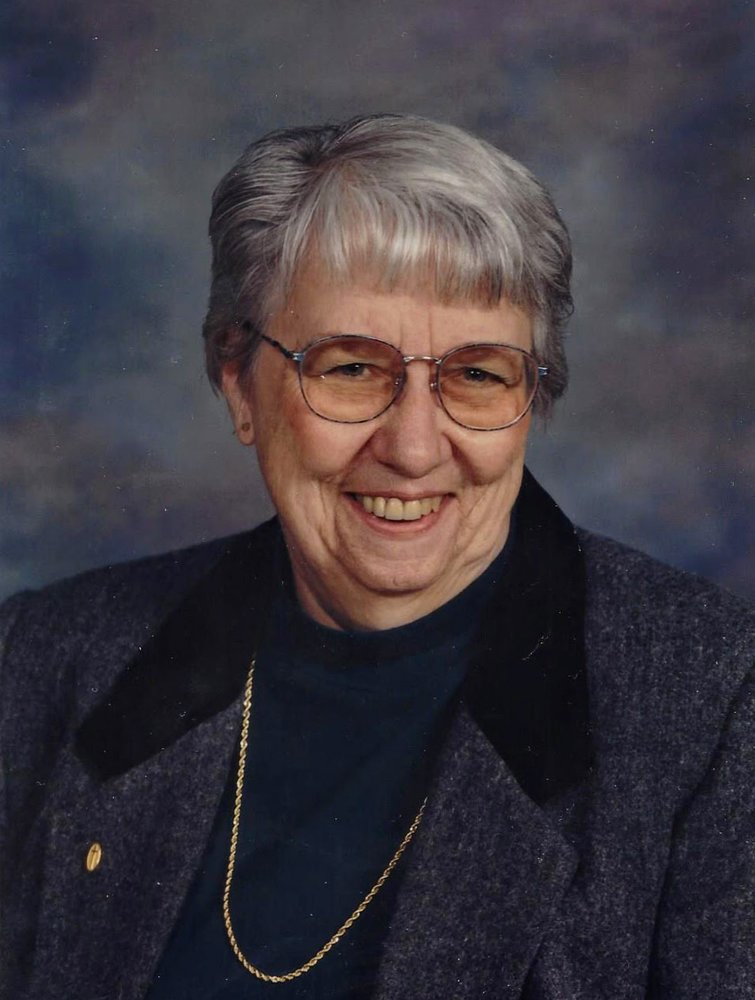 Emogene Rachel Winkler, age 93 of Wamego, passed away Sunday, March 1, 2020 at the Good Samaritan Society in Wamego. She was born on September 19, 1926 in Blaine, the daughter of Herman Conrad and Emma Dorothy (Teske) Wahl. She lived in Pottawatomie County, south of Wheaton until 3rd grade when the family moved to the Grant Township, southeast of Riley. She graduated from Riley High School in 1944. On March 23, 1947 in Highland, she was married to Willis B. Winkler. They were married in a double ceremony with her friend Norma Meyer and her brother, Galen Wahl. Emogene and Willis made their home on a farm northeast of Riley until 1976 when they moved to Manhattan. On the farm, Emogene raised chickens and sold eggs and cream for spending money and to help support the family. Eventually, she became an Avon representative and then worked for the Riley Countian. She began working as an account clerk at K-State in 1971, retiring from the College of Veterinary Medicine in 1988. She remained independent and involved even after she moved to Valley Vista in Wamego. Emogene was always active in the community and in the church, holding many leadership positions over the years. At Riley, she was a member of the American Legion Auxiliary and the Fairview Presbyterian Church. Later, in Wamego, she was a member of the Wamego United Methodist Church. When her children were grown, Emogene began painting, writing and presenting humorous programs for various groups. She began writing with “The First Hundred Years,” a biography of Anna Bergeson Winkler, “The Thirteen Lives of Wink,” about Willis, including his time as a prisoner of war at the end of WWII, and ending with “A Look at Life from the Evening Side,” which was her own story. Emogene also loved to travel. She and Willis made several trips to Alabama, also to 76th Troop Carrier Squadron Reunions. Later she traveled with Susan and Fred to Germany, France, Switzerland and Hawaii. Beginning in the 1980’s she also began researching family history and compiled extensive histories in the days before the internet, calling and writing letters to many relatives over the years. She is survived by her three children and spouses, Larry (Peggy) Winkler of Topeka, Susan (Fred) Guzek of Dover and Steve (Trish) Winkler of Albuquerque, New Mexico; seven grandchildren and nine great grandchildren. She was preceded in death by her husband, Willis Winkler and three brothers, Julius, Galen and Milton and their spouses. Funeral services will be held at 11:00 a.m. Friday March 6, 2020 at the Fairview Presbyterian Church with Pastors Gerry Sharp and Kevin Larson officiating.  The family will receive friends from 6:30 until 8:00 p.m. Thursday at the Anderes-Pfeifley Funeral Home. Burial will be in the Riley Cemetery. Memorials may be made to the Fairview Presbyterian Church or the Flint Hills Breadbasket.  Contributions may be left in care of the Anderes-Pfeifley Funeral Home.
To order memorial trees or send flowers to the family in memory of Emogene Winkler, please visit our flower store.
Send a Sympathy Card