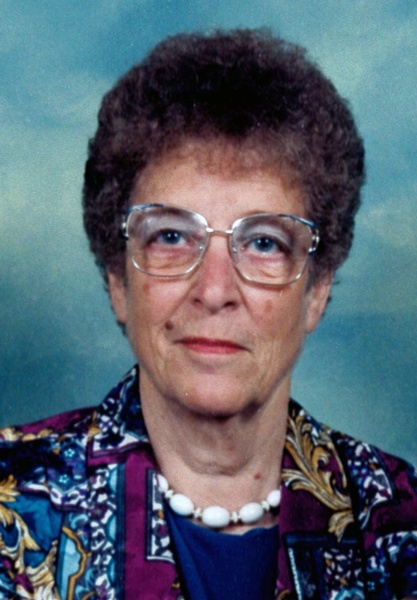 Elva Marie Kaspar, age 92 of Leonardville, passed away Thursday, September 1, 2016 at the Leonardville Nursing Home. She was born on June 20, 1924 on a farm near Green, the daughter of James Howard and Lulu Margaret Sofa (Eppler) Noyes. She graduated from Green Rural High School in 1941. On May 2, 1944, she was married to John William Kaspar in Clay Center. He preceded her in death on November 22, 2011.   She taught for four years after high school. She cooked for twelve years at the Green Cafe and then at the Clay County Community Hospital where she retired in 1992. She was a member of the Green United Methodist Church, Green HDU and the Clay Center Elks Lodge. She enjoyed dancing, playing cards, family gatherings, cooking for her family and playing the piano by ear.   She is survived by three daughters, Karen Gibson of Ottawa, Kathy Isaacson and husband Dick of Manhattan and Konnie Evans and husband Bryan of Green; eight grandchildren and eleven great-grandchildren.   In addition to her husband, she was preceded in death by her sister, Eva Hammel. Funeral services were held on September 7, 2016 at the Green United Methodist Church with Pastor Sarah Gill officiating. Pallbearers were Jordan Evans, Jason Anderson, Patrick Schurle, Joseph Schurle, John Gibson, Emily Evans, Kendra Worthen and Carey Lantis. Burial was in the Green Fancy Creek Cemetery. Memorials have been established for the Green United Methodist Church and the Leonardville Nursing Home. Contributions may be left in care of the Anderes-Pfeifley Funeral Home.
To order memorial trees or send flowers to the family in memory of Elva Marie Kaspar, please visit our flower store.