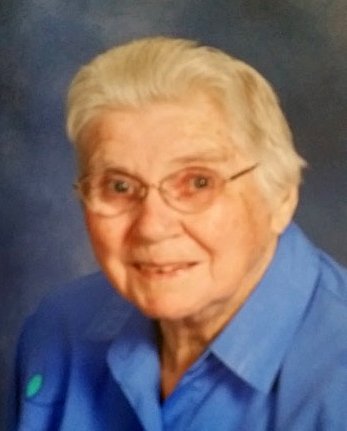 She was born on December 3, 1920 in Riley, the daughter of Thomas and Irene (McCloskey) Jones and graduated from Clay County Community High School in 1938.

Eleanor was a member of the Clay Center Christian Church and loved her Lord.  She enjoyed walking and was an independent and private person, who mowed her yard into her late 80‘s.

In addition to her husbands, she was preceded in death by two brothers, Howard and Larry Jones and one sister, Virginia Cameron

Graveside funeral services will be held at 10:30 a.m. Thursday, June 15, 2017 at the Milford Cemetery.  The Anderes-Pfeifley Funeral Home is handling the arrangements.

A memorial may be made in the Donor’s Choice.  Contributions may be left in care of the Anderes-Pfeifley Funeral Home in Riley.

To order memorial trees or send flowers to the family in memory of Eleanor I. Strauss, please visit our flower store.
Send a Sympathy Card