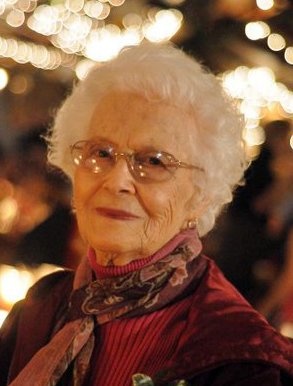 Elaine Medlin, age 99 of Manhattan, passed away Thursday, January 11, 2018 in the Sloan House at Meadowlark Hills

She was born on August 31, 1918 in Norway, Kansas, the daughter of Richard S. and Margaret (Carlson) Loring.

Elaine grew up on a farm with her brothers Lee and Glenn in Republic County, Kansas spending much time with cousins that she said were more like sisters and brothers to her. She cherished her memories of this time in her childhood. In grade school she was selected to be the Maypole Queen because she said she was the strongest girl to hold up the maypole! She loved playing on the local basketball team and enjoyed watching basketball during her lifetime. When she graduated high school, she went to McPherson where she attained a teaching certificate. She then returned to Norway where she taught in a one room schoolhouse until she was married.

She and Maurice raised their family in Riley while they owned and operated Medlin Chevrolet for over 30 years. They both enjoyed spending time together while fishing, dancing and traveling. They were fortunate to have travelled many places because of sales at their dealership visiting Rome, Hawaii and other locations. One of their trips they won took them to Oslo, Norway where Elaine's mother was born and lived before coming to America. They were able to meet Aunt Clara while there knowing exactly who she was the minute they saw her as she looked identical to Elaine's mother! Elaine was so creative as she enjoyed sewing, painting, and even made their own king sized bed and mattress as she didn't want to pay full price at the store. When the girls were young she was a Girl Scout leader. She enjoyed hosting events for friends and their family and loved preparing scrumptious food in anticipation of wonderful memories that would be made. Her kids and grandkids loved her famous barbecue meatballs and Swedish pancakes. All through her life she kept close ties with her family and friends in the Norway and Scandia, Kansas area-- even attending a Loring first cousins coffee as often as she could that was held monthly. She was able to enjoy going to those until she was 98 years old surrounded by many other cousins in their 90's. She was fortunate to have lived in Sloan House at Meadowlark Hills in Manhattan the past couple of years. She enjoyed the staff and residents every single day while she was there. She was able to celebrate her 100th Christmas with all of her family. The great grandkids wore Santa hats and sang a couple of Christmas carols to her after dinner.

In addition to her husband, she was preceded in death by one son, Neal Medlin; one sister, Bette Lou Loring; one brother, Lee Loring and one son-in-law Duane Flaming.

Funeral services will be held at 10:30 a.m. Wednesday, January 17, 2017 at the Anderes-Pfeifley Funeral Home with Pastor Kevin Larson officiating.  The family will receive friends from 7:00 until 8:00 p.m. Tuesday.  Burial will be in the Riley Cemetery.

Memorials may be made to the Riley Presbyterian Church and left in care of the Anderes-Pfeifley Funeral Home.

To order memorial trees or send flowers to the family in memory of Elaine Medlin, please visit our flower store.
Send a Sympathy Card