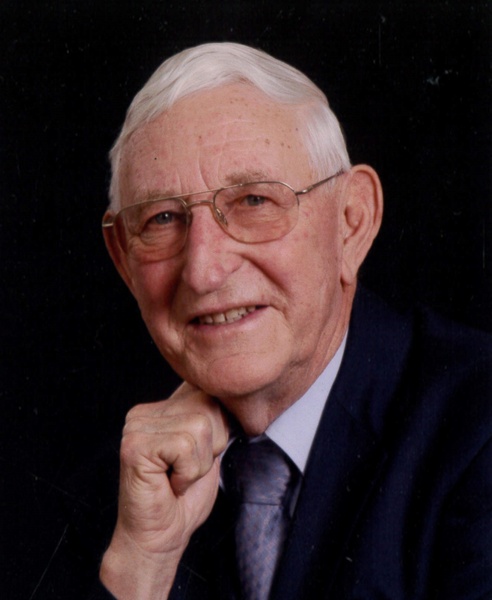 Dwaine was born on July 22, 1930, the second son and third child of William Frederick and Lauretta Victoria Sumners Shorman in Morganville, Kansas.

His elementary years were spent at Morganville and Clay Center Schools.   He was president of his senior class and enjoyed sports, drama, and music.  Dwaine graduated from Wakefield High School in 1948. He earned his private airplane pilot’s license in 1968 and later earned an Aircraft and Powerplant Mechanics license from Kansas State Tech Institute.

In 1953, he married Rosalie Woellhof of Clay Center and farming continued to be their way of life.  He was a farm owner, manager, operator, and mechanic for 53 plus years.  Dwaine and Rosalie lived on their family homestead for 64 years, the same farm his great-grandparents owned.   He enjoyed remodeling and upgrading their family home which was built in 1874.  He took much pride and satisfaction in continuing this farming tradition of over 100 years.  Other work accomplishments: worked ten years for the ASCS, represented Vigortone Feed and Archer Oil, and worked at Fullington Lumber.

Music was the enjoyment of his life and a song was always on his lips.   His music career began in high school and developed into solo work, quartets, church choir, leading the singing and fulfilling requests at weddings, funerals, churches and community events.  Playing the trombone and cornet was an added compliment to his musical accolades.

Some of Dwaine’s most memorable experiences involve a missionary work tour to Kenya, as well as, ministering along with his wife Rosalie with the local Marriage Encounter group “Flame.” He also enjoyed traveling with the Holiday Rambler Sunflower RV Club.

As a young man of 19, he committed his life to Christ.  Dwaine was a member of the First Baptist Church and was a spiritual leader to his family and church. He was involved in the music and drama ministry, taught Sunday school classes, and served as a deacon.

Dwaine loved being a family man.   He was so proud of their three sons, Gary, Darcy and Mark, their wives, grandchildren, and great grandchildren.  He was a wonderful husband, father, grandfather, brother, a good friend and neighbor.   He will be missed by those who knew him as a friendly, kind, helpful, and caring person.

Dwaine was preceded in death by his parents, one sister, Betty Jean, and brothers Don and Robert.  He is survived by his wife Rosalie, his three sons and their families, two sisters, three sisters-in-law, and numerous nieces and nephews.

Funeral Services will be held at 11:00 am Friday, April 29, 2022 at the First Baptist Church in Clay Center with Pastor Matthew Coleman officiating. The family will receive friends from 9:30 until 10:30 am on Friday in the Fellowship Hall at the church. Burial will be at 3:00 pm in the Fairview Cemetery, north of Riley.

Memorials may be made to the First Baptist Church or to Voice of the Martyrs and may be left in care of the Anderes-Pfeifley Funeral Home.

To order memorial trees or send flowers to the family in memory of Dwaine Shorman, please visit our flower store.