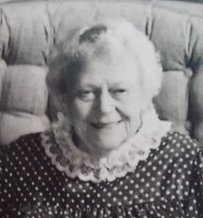 Donna Boatwright, age 90, of Chanute, passed away on Saturday, May 20, 2017 at the Neosho Memorial Regional Medical Center in Chanute.

She was born on February 8, 1927 near Bennington, the daughter of Earl S. and Elizabeth E. (Stoner) McVaugh.  After graduating from high school, she attended cosmetology school and at the age of 20, owned and operated her own business, the Warem Beauty Salon.

After selling her business, in addition to becoming a homemaker, Donna remained active in many other things as well.  She remodeled numerous homes, becoming one of the few woman carpenters in the 60’s and 70’s.  She authored several books on  gardening, quilting, and cooking and she and her husband co-authored two children’s books. Donna was also an active Cub Scout and 4-H leader.  She was a member of the United Methodist Church and attended in Wamego and Chanute.

In addition to her husband, she was preceded in death by two sons, Rex and Bruce Boatwright and one sister, Doris Nanninga.

Graveside services will be held at 11:00 a.m. Thursday, May 25, 2017 at the Riley Cemetery with Rev. Bille Eisele officiating.  The family will receive friends from 10:00 until 10:45 a.m. at the Anderes-Pfeifley Funeral Home, where they will then form a procession to the cemetery.

A memorial has been established for the Dr. Virgil and Donna Boatwright Scholarship Fund.  Contributions may be left in care of the Anderes-Pfeifley Funeral Home.

To order memorial trees or send flowers to the family in memory of Donna Boatwright, please visit our flower store.