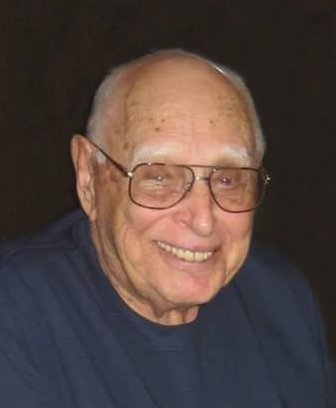 Donald Wayne Bryson, age 94 of Riley, passed away Wednesday, July 1, 2020 at the Good Shepherd Hospice House. He was born on August 28, 1925 in Riley, the son of Lonie McKinley and Hattie Edith (Craft) Bryson. On March 21, 1947, he married Betty Louise Phalen. She preceded him in death on January 4, 1999. He graduated from Riley Rural High School in Riley, KS in 1942, and then attended welding school in Topeka. Upon graduation he traveled to San Francisco to work as a welder in the shipyard. When he turned 18 he enlisted in the United States Marine Corp and served from October 24, 1943 to October 5, 1945. He received a purple heart for injuries he suffered during battles of Peleliu and Okinawa. Don was a rural mail carrier and a member of the American Legion. He enjoyed fishing, watching the Chicago Cubs and following his grandchildren’s activities. He is survived by two sons, David Bryson and wife Barb of Overland Park and Randy Bryson of Riley; one daughter, Cindy Rignell and husband Bobby of Riley; seven grandchildren, Cambria Fleming, Kimberly Hunter, Kelsey Robinson, Jessica Bryson, Trini Pilgrim, Lonnie Rignell and Brett Rignell and twelve great grandchildren. In addition to his wife, he was preceded in death by his parents; one sister, Lorrene Coder and two great grandchildren. Graveside services will be held at 10:00 a.m. Saturday, July 4, 2020 at the Riley Cemetery with Pastor Gerry Sharp. Family and friends are invited to meet at the Anderes-Pfeifley Funeral Home at 9:30 a.m. to go in procession to the cemetery. Respect calls may be made from 9:00 a.m. until 5:00 p.m. Friday at the funeral home. Memorials have been established for the Community Food Basket serving northern Riley County and the Good Shepherd Hospice House. Contributions may be left in care of the Anderes-Pfeifley Funeral Home.
To order memorial trees or send flowers to the family in memory of Donald Bryson, please visit our flower store.