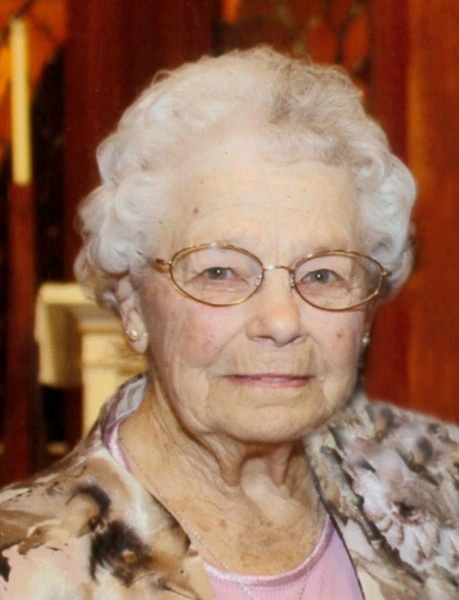 Delpha Jean Nelson, age 92 of Blue Rapids, passed away Wednesday, July 28, 2021 at the Blue Valley Senior Living in Blue Rapids. She was born on February 8, 1929 in Manhattan, the daughter of Herbert Otto and Blandina (Killman) Pfaff. She grew up in the Winkler area and was a member of the St. John’s Lutheran Church. She attended the Winkler Grade School and graduated from Randolph High School in 1947. After high school she moved to Manhattan and worked as a secretary at the Riley County Public Works. On February 17, 1952, she was united in marriage to Elmer “Junior” Nelson, Jr. at the St. John’s Lutheran Church in Winkler. He preceded her in death on August 19, 2018. Delpha and Junior moved to Swede Creek in 1953 after the Tuttle Creek Dam relocated them from that area. They were longtime members of the St. Peter’s Lutheran Church. She was a farm wife and loved raising baby calves. She was a member of E.H.U. of Swede Creek and Winkler Willing Workers Club and worked the election polls in Swede Creek for several years. If there was anyone around the house at meal time they had to stay and eat and nobody complained because she was a great cook. She is survived by her son, Roger Nelson and wife Penny of Randolph; her daughter-in-law, Patty Nelson of Manhattan; five grandchildren, Heather Nelson and husband Ross Olsen of Pueblo, Colorado, Garrett Nelson and fiancé Harlee Thompson of Manhattan, Jesse Nelson and wife Kelli of University Park, Stacy Wurtz and husband Brian of Randolph and Adam Nelson and wife Cassandra of Randolph and eleven great grandchildren, Will, Olivia, Lucy, Rielyn, Cord, Claire (Lil Del), Quincy, Brynlee, Watson, Layton and Kannan. In addition to her husband, she was preceded in death by her parents; two sons, Larry Nelson and Ronnie Nelson; three brothers, Vernon Pfaff, Everett Pfaff and Dean Pfaff; one granddaughter, Ashley Nelson and two brothers-in-law, Paul Novak and Verlin Wieters. Funeral services will be held at 10:30 a.m. Thursday, August 5, 2021 at the St. Peter’s Lutheran Church with Pastor Matthew Durance officiating. The family will receive friends from 6:30 until 8:00 p.m. Wednesday at the Anderes-Pfeifley Funeral Home. Music will be furnished by Kathie Otney. Pallbearers will be Jesse Nelson, Adam Nelson, Garrett Nelson, Alan Nelson, Brian Wurtz and Jodie Reed. Burial will be in the St. John’s Lutheran Cemetery. Memorials may be made to St. Peter’s Lutheran Church or Meadowlark Hospice and left in care of the Anderes-Pfeifley Funeral Home.
To order memorial trees or send flowers to the family in memory of Delpha Nelson, please visit our flower store.