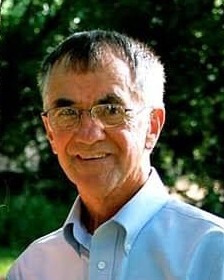 He was born on August 27, 1939 in Clay Center, the son of James Albert and Sylvia Maxine (Lake) Brown.

He married Karen Wooledge on July 8, 1961 in Clay Center.  She survives of the home.

Bob, in his early years, served as a patrolman for the Clay Center Police Department and as a volunteer fireman in South Hutchinson.  When his children were born, he left these pursuits and spent the rest of his working life in retail.  He was for many years, the chief problem solver for the customers of Waters True Value in Manhattan.

Bob was a ceaselessly proud father, grandfather and great grandfather.  He was the collector of huge mountains of all things that were just barely broken or in need of just a small repair.  He was Mr. Fixit to his family and friends, doing repairs and refinishing many pieces of furniture.  His free time was spent as a member of Sertoma and of the Manhattan Kansas Kennel Club where his love of all things canine was never satisfied.

He was preceded in death by his parents and two brothers, Carol Brown and Don Brown.

A memorial service will be held at 2:00 p.m. Tuesday, December 20, 2022 at the Anderes-Pfeifley Funeral Home with Pastor Gerry Sharp officiating.  The family will receive friends from 5:00 until 7:00 p.m. on Monday.  Inurnment will be in the Riley Cemetery.

Memorials may be made to the Riley City Library and left in care of the Anderes-Pfeifley Funeral Home.

To order memorial trees or send flowers to the family in memory of Bob Brown, please visit our flower store.