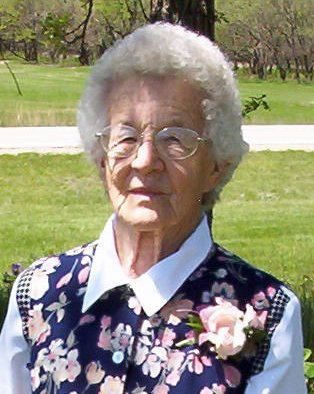 She was born on the family farm in the Rose Hill community, north of Randolph on March 13, 1927, the daughter of Oscar and Amanda (Bary) Linder.  She graduated from Olsburg High School in 1944.

She was married to Leroy Carlson on May 28, 1944.  To this union, three children were born, Melvin, Donald and Peggy.  Leroy preceded her in death in 1961.

Barbara worked as a secretary for the Kansas Poultry Improvement Association, Riley County Farm Bureau and other businesses throughout her working career.  She also sold life insurance for Woodmen Insurance of Lincoln, NE.

She was preceded in death by her parents; both of her husbands; her brother, Carl Linder and her son Don in 2013.

Funeral Services will be held at 10:30 a.m., Thursday, December 27, 2018 at the Anderes-Pfeifley Funeral Home with Pastor Dwight Diller officiating.  Burial will be in the Olsburg Cemetery.

Memorial contributions may be made to the Blue Valley Senior Living and left in care of the Anderes-Pfeifley Funeral Home.

To order memorial trees or send flowers to the family in memory of Barbara Hanson, please visit our flower store.
Send a Sympathy Card