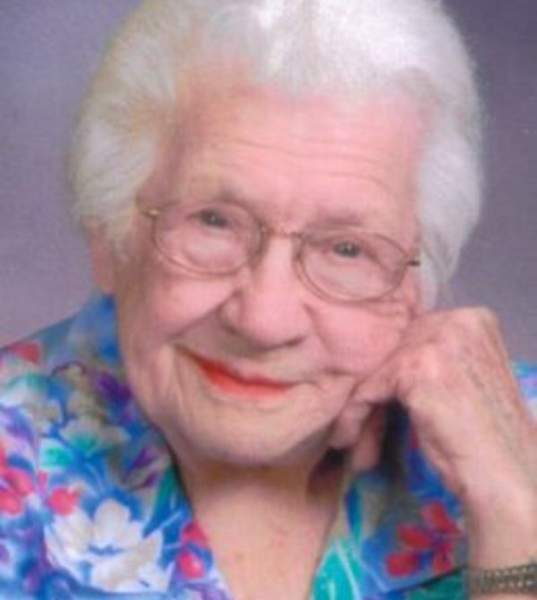 Delores M. Sutton, age 104, of Blue Rapids, passed away on Saturday, November 27, 2021, at Blue Valley Senior Living in Blue Rapids.Delores was born March 14, 1917, at Luray, Kansas to Jesse and Venus N. (Fishback) Curry. Delores married Ralph E. “Smick” Sutton on August 11, 1934, at the courthouse in Marysville. He passed away in 1980. They had one son Harold. Delores was a member of the Blue Rapids United Methodist Church, United Methodist Women, and the Rebekah’s. She had worked as a cook at the Blue Rapids Grade School from 1957 to 1968 when she retired.  She enjoyed quilting, working on embroidery, playing cards with the ladies and having coffee and cooking. She was an excellent baker making all kinds of treats. She loved to make character birthday cakes for her grandchildren, including the great and great-great grandchildren. She also loved family gatherings; she had never missed a family gathering until Thanksgiving this year. She also loved to sew and her granddaughters never had to buy clothes, because she made them all.Survivors include her son Harold (Virginia) Sutton of Blue Rapids, two grand-daughters, Crystal Gordon of Blue Rapids and Carolyn (Doug) Griffitt of Wamego, four great-grandchildren: Nicholas (Britany), Alex (Chris), Rachel and Jennifer, and four great-great grandchildren: Cade, Tyler, Ryker and Amelia.Preceding Delores in death were her husband, parents, and a granddaughter Carla. Viewing is from noon to 8:00 pm, Wednesday, at Terry-Christie Funeral Home in Waterville. Funeral services are at 10:00 am, Thursday, December 2, 2021, at the United Methodist Church in Blue Rapids, with Pastor Berniece Ludlum officiating. Music is to include “The Old Rugged Cross” and “Amazing Grace” sung my Kim Oatney and accompanied by Althea Wertz. Casket Bearers are to include: Nicholas Gordon, Alex Gordon, Chris Smith, Doug Griffitt, Jordan Chamberlain and Tim Manley. Burial will be at Prospect Hill Cemetery, north of Blue Rapids. Memorials are suggested to the Blue Rapids United Methodist Church and may be sent in care of Terry-Christie Funeral Home at PO Box 61, Waterville, Kansas 66548.

To order memorial trees or send flowers to the family in memory of Delores M. Sutton, please visit our flower store.